The Golf Club has seen many a birdie during its storied past.

Now new eagles have been spotted, but they are the type more likely to lower sales prices than scores.

A pair of bald eagles apparently are calling the now-vacant property home. 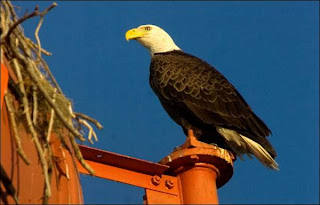 City officials say bald eagles have nested on a cellular phone tower adjacent to The Golf Club, a public golf course and former social destination that closed in July 2006.

But the eagles bring with them complications about the property’s future. If eagles are nesting on the site, or even nearby, development on the 177-acre site is restricted by city laws protecting eagle nests.

Owners at the golf course want verification before putting plans on hold to rezone the land.

“The city has a picture of an eagle sitting on that pole,” said William Nolan, planning consultant for owners Florida Gulf Ventures. “There is no question there is a nest on that cell tower. Whether that is his nest or not, I don’t know.”

But city officials for years have received reports eagles may have taken over an abandoned osprey nest near the course. A picture was snapped by city officials this week that appeared to show an eagle, and Friday, The News-Press also was able to capture an eagle on film by the nest.

The defunct golf course has become a catalyst for debate in southeast Cape Coral. The land was not only the site of an 18-hole golf course, but also a large clubhouse that was host to popular social events and, for a short time, a hotel, since the 1960s.

Before becoming The Golf Club, it was developed by Gulf American Land Corp. as the Cape Coral Country Club and used as a marketing engine to attract new residents to the area.

But Nolan said the property is no longer viable as a golf course.

The land is surrounded by some of Cape Coral’s oldest and most established neighborhoods, much of it high-priced property, Nolan said. Property owners’ best appraisal for The Golf Club is $28 million.

An application to rezone the golf course for mixed-use development was filed earlier this year. Neighboring homeowners were informed of the possibility for redevelopment in April. They have launched their own campaigns to keep it a golf course.

City officials have expressed interest in buying the property and developing parkland. Bertolini wonders if arrival of eagles will change the asking price
"This presents a new issue,” she said. “I think any new movement of residents to the area will be animals.”

And city ordinances provide security to these newcomers.

If the nest is proven to be a bald eagle nest, developers would need to draft an Eagle Nest Management Plan for the 1,100-foot radius around the nest. Construction would be allowed only seasonally, and the area would have to be managed to provide optimum protection for the eagles.

That protection zone encompasses a central chunk of the golf course property that includes where the clubhouse once stood.

Other possibilities, such as relocation of the wildlife or exchange of properties for environmental use, may end up on the negotiating table.

But possibility of the birds adds more headaches to potential development plans, and so far, no buyer has publicly expressed an interest in the site.

Nolan said there are plans for development in the works, but details cannot be disclosed at this time.

But some city officials are skeptical.

“As far as I can tell nobody is willing to do anything with the property except let it sit there and become a blighted area,” said District 1 Councilman-elect Jim Burch.

The property right now has been cited by city code enforcement for failing to mow grass and allowing overgrowth of the greens since the course’s closure.

Bertolini would like to see the property turned into parkland if possible.

“I know developers would like to develop it commercially because that is where they can make the most money,” she said. “But why not use the land as a central park in that part of the city.”

Another soon-to-be council member has a different take.

“I don’t think the city should buy it,” said District 2 Councilman-elect Pete Brandt. “I tend to think all such things are better in the hands of private enterprise than in the hands of the city.”

As Nolan pondered the property’s future, he decided to do it from the property. He spent much of Friday near the alleged eagles nest trying to figure out just what bird was setting up house near the land.

“The nest is just not close enough to where I can see what is going on,” he said.
“It looks to me like nobody is home.”